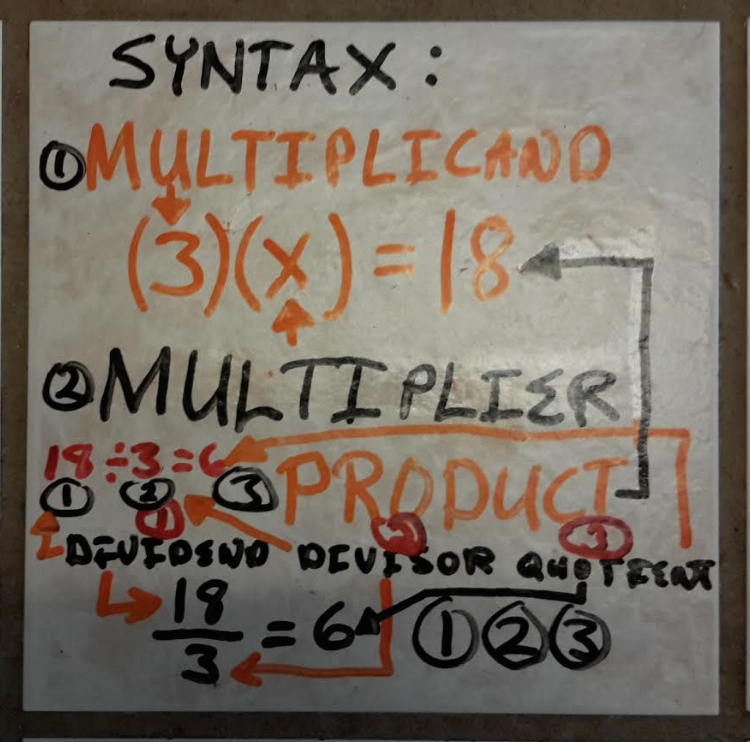 With regard to Multiplicand and Multiplier, first and foremost let me say this: it doesn't really matter which comes first...but using logic and reasoning we can see WHY the multiplicand comes FIRST and the multiplier comes SECOND.

Multiplicand and Multiplyer: simple, right? Well no, because you have 15 boys not 15 marbles. The thing being multiplied is marbles. 3 x 5 = 15.

But here is some feed back that sums up a discussion I've had in 49 0f 50 states and in one Provence of Canada:

"Also be sure to teach them syntax...just let them know that we read 9 x 2 as "nine taken two times" that's two nines as opposed to 2 x 9 which is "two taken nine times" that is, nine twos, subtle difference."

Well, English being what it is, I view 9 x 2 as "nine copies of 2" and 2 x 9 as "2 copies of 9". Just the opposite of the way you teach. And I've seen both "dogmas" taught in various materials. So unfortunately there is no consensus on this.

The person is correct there isn't, but there should be.

"The Rules" in most countries are very simple, multiplicand first multiplier second. People think it doesn't matter because multiplication is "associative."  Here's a few minutes of explanation:

You might want to go back and watch the whole video just for fun.

Here is a page on the associative. Associative and commutative also seem to add confusion instead of clarity. It's true that multiplication is associative, but associative means 2*(3*4) = (2*3)*4. In this context you want the commutative property, which says 3*5 = 5*3. This is a significant distinction because of the importance of non-abelian groups in math and physics.

In fact, thanks to the internet, I was able to do quite a bit of research on this Multiplicand and Multiplier "argument" or "discussion" if you prefer.

I've had this discussion probably 100 times or more in my travels...consensus is pretty plain: multiplicand first, multiplier second. But "why" is the question I'm much more interested in.

"Any fool can make a rule and any fool will follow..."


5 x 3 is indeed the same as 3 x 5 as long as you stay abstract. These are just factors. I have seen three sets of rules at leaste that I have come across in my travels...the one I espouse here: 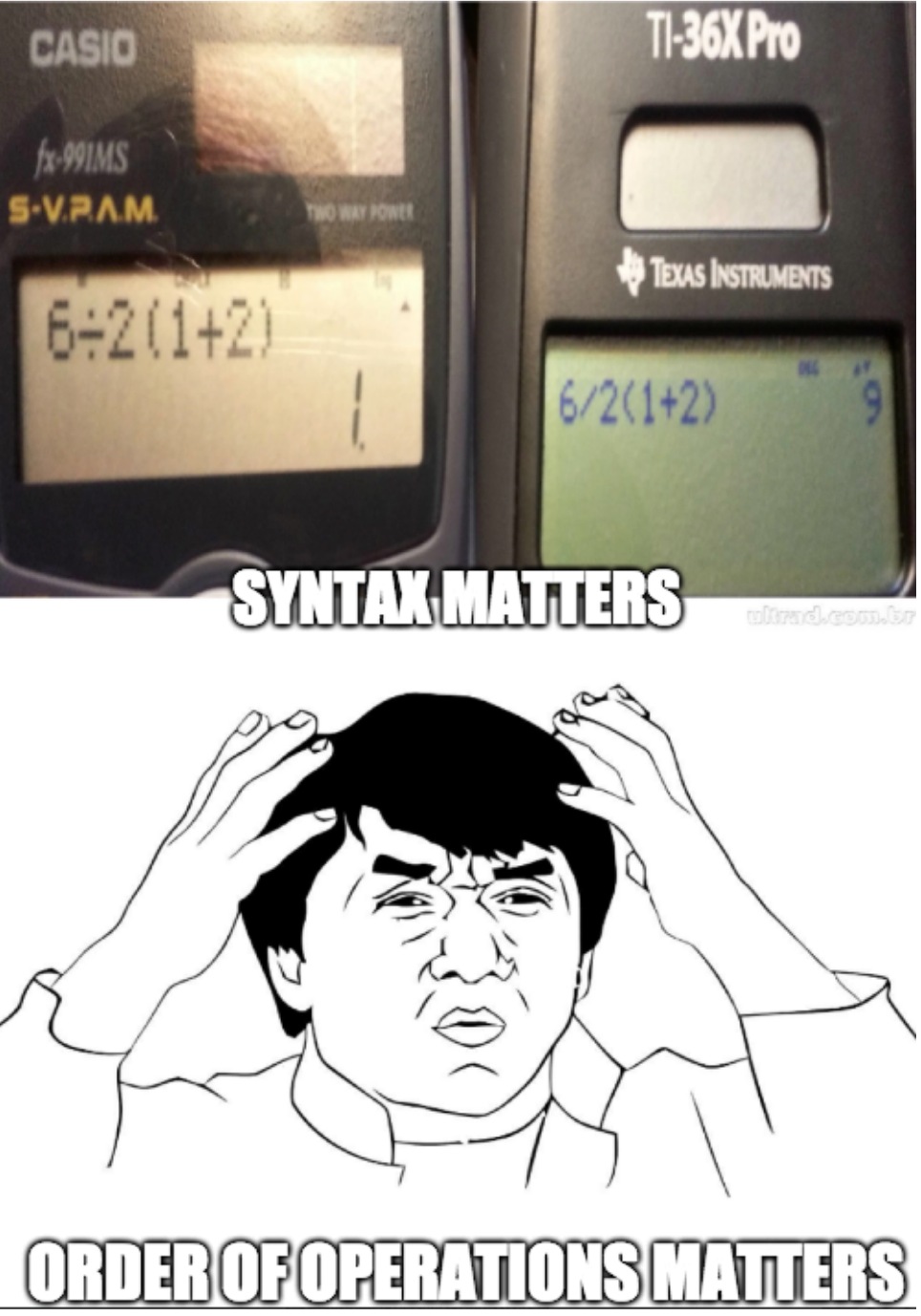 3. Which ever number is smallest is the multiplier.

is considered less correct than

But the product, that is, the amount you get after you multiply is the same so why bother even talking about it? Why is there debate? Why is one more/most correct?

Because numbers describe reality numerically that's why and because syntax matters.

The order is universally LxWxH.

Carpenters who stray from this find themselves in trouble, and might end up making doors for some very corpulent midgets.

When using base ten blocks the multiplicand HAS to come first to mimic notation. We count across first, then up. Period. This is the pattern we use. It's the same every time.

But there is more to it than that.

Here we have a simple lesson with the blocks that illustrates Multiplicand and Multiplier and also shows the patterning which stays the same throughout this base ten methodology.

One of the reasons we say 3 taken 5 times is because it clarifies that we are doing multiplication. I can tell you with alacrity that there are plenty of school districts teaching multiplication with flashcards where the students think that 3x5 magically turns into 15. And they have to memorize this in order to pass a test. I have seen many students all over the USA express shock and wonder when they see 3 x 5 means 5 threes and that we can count them and see them. Even more so when they SEE division. Some may think I'm exaggerating or just saying this for effect. I'm not. 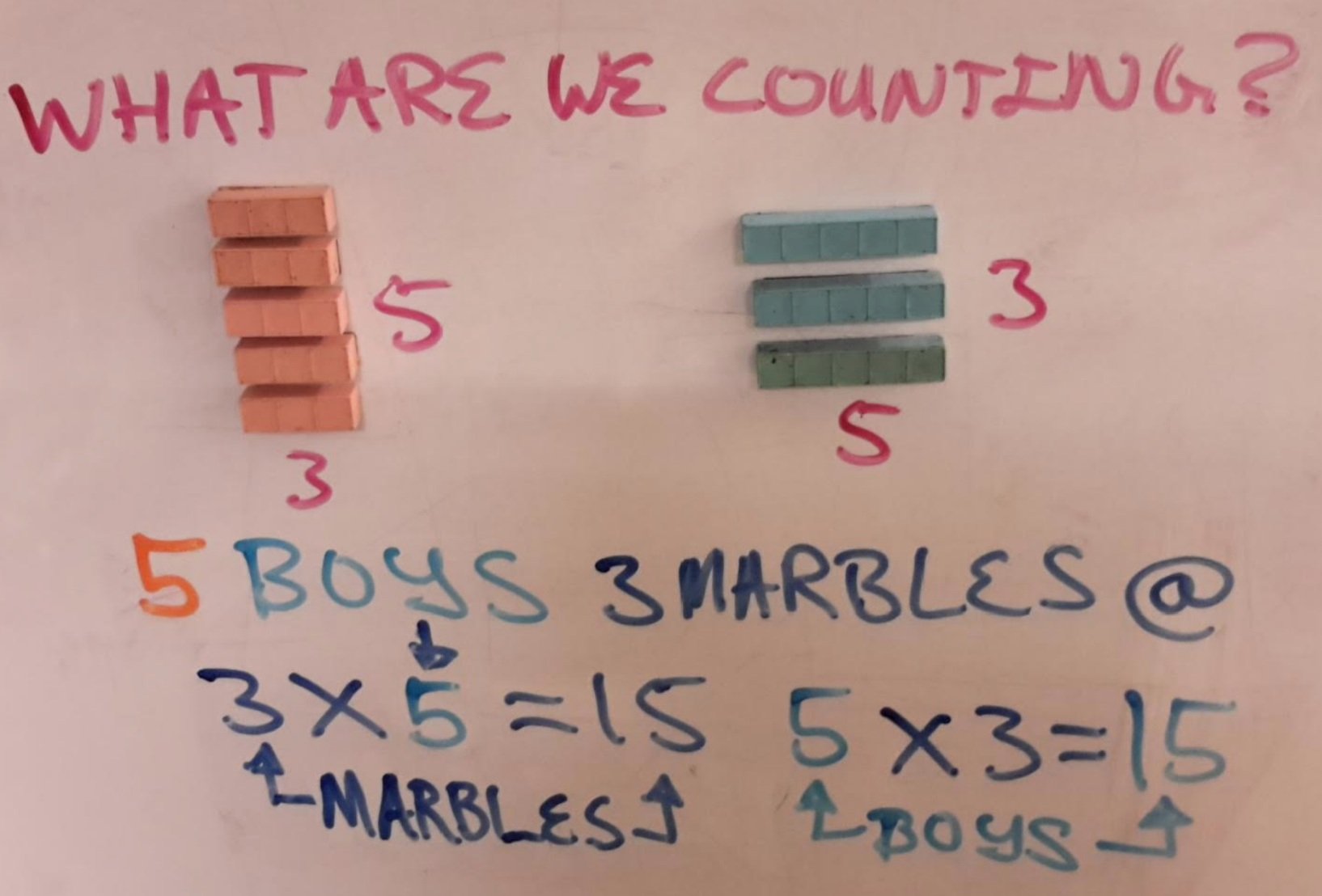 Multiplicand and Multiplier
made easy: 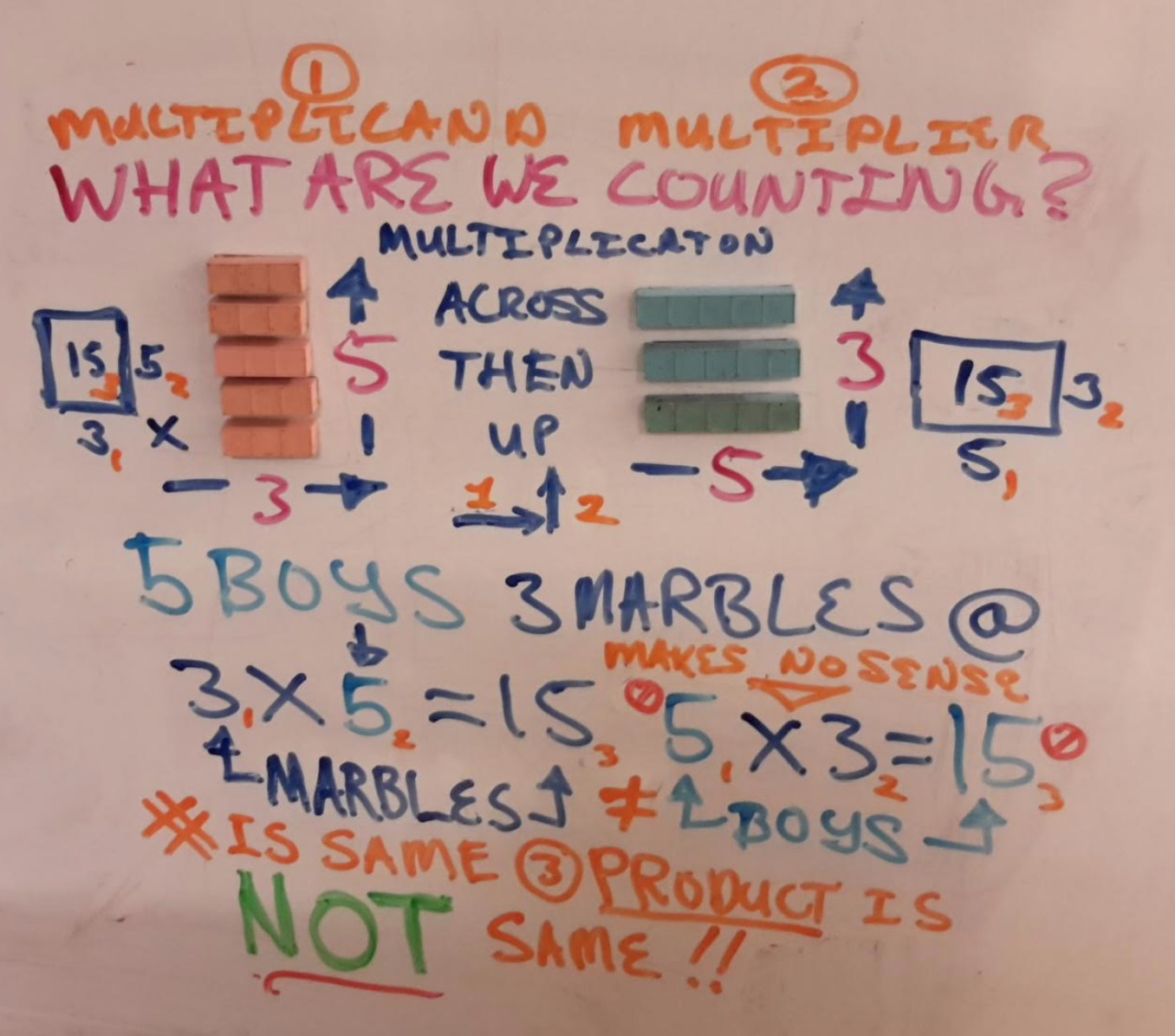 The students often get concepts confused when they are presented with symbols only. Multiplicand and Multiplier are often terms that get lost in the shuffle if they are discussed at all. Algebra is absolute testament to this. Students are correct that 3x6 is the same as 18. So is 6x3. They think they are synonyms or synonymous , but they lose the concept that we are just counting, or adding over and over again. 11x12 is counting 11 twelve times. There are tricks you can learn for multiplying by 11 and other numbers but don't lose sight of the basic concept: all we are doing is counting, and we are always counting something.

Also we are aware that the pattern for division is always dividend, divisor, quotient. No argument there. In the same manner it's multiplicand, multiplier, product.

Multiplication as explained by Wikipedia. Somehow I don't think this will help.

Go from Multiplicand and Multiplier back home.

Teach Multiplication with base ten blocks.

"For any reporter, education is a topic where everything else - money, politics, et cetera - intersects. I have four kids in K through 12, so I'm knee-deep in it. I'm really interested in the philosophy behind it all. Should you just memorize your multiplication tables, or should you understand the concept behind them?" ~Soledad O'Brien

"The devil is in the details." ~Anon